The National Bureau of Investigation (NBI) arrested five people falsifying documents during an entrapment operation on October 25. The arrested suspects were forging signatures of notaries public.

Ma. Concepcion and Ronnie Longno, Eden Gamboa, Sherilyn Flores, and Genefredo Gemina, all from Bacolod City, were charged for falsification of documents and usurpation of authority or official before the City Prosecutor’s Office.

According to NBI-Bacolod Head Renior Baldovino, the five suspects were arrested during an entrapment operation along the Cottage Road in Bacolod City. The group forged the signatures of lawyers Mariano Natu-el and Leonardo Cabalfin in notarizing affidavits.

Baldovino said Natu-el and Cabalfin are actual lawyers as confirmed by the Office of the Bar Confidant in the Supreme Court.

READ: Do you want to check if an NBI Clearance is FAKE or NOT? Check it here.

The group operates in a stall with the signage Travellers Insurance and uses a blue Hyundai Starex van and green Suzuki multi-cab minivan parked along the Cottage Road to conduct their illegal transactions.
When confronted, Baldovino said the five suspects could not present any documents to prove that they are lawyers or have legal authority to perform notarial acts. They were caught on the act by an operative who paid them marked money.

Last month, the Bacolod City Regional Trial Court Branch 52 Judge Raymond Joseph Javier requested assistance from NBI Bacolod to conduct a covert operation and investigation in the area near the Hall of Justice for possible violation of Notarial Practice Act due to some reports that some people are “involved in illegal activities and doing unlawful acts.” 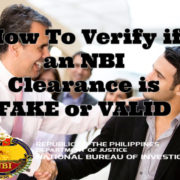